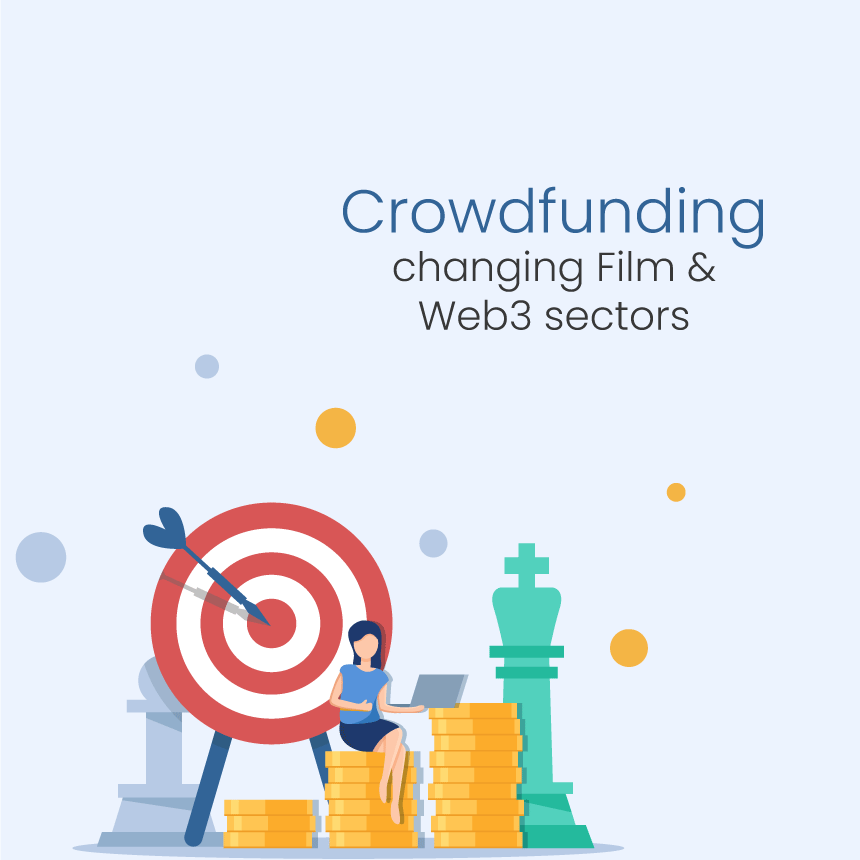 The global film industry has been using crowdfunding for some time now. It has become a unique intervention that moderately decentralized funding away from the studios, private equity firms, media companies, and producers. Eventually, the possibilities in this previously linear region have increased through Web3 as well.

Technological advancements have drastically changed the film industry over the years. Especially with the internet, and more recently, with blockchain technology, we may be witnessing significant changes in how films are made and distributed in the future. Moreover, one of the substantial internet evolutions is Web3. This will decentralize the web and put power back into the hands of the users. This shift in the scenario will undoubtedly have a massive impact on the film industry and how films operate.

How is Web3 affecting the film industry?

Web3 is becoming to be a new distribution model for films. It offers a more direct connection between the filmmakers and the audiences without any intermediaries like the distributors or the exhibitors. The new system is trying to make the film industry more accessible and democratic as it has the potential to revolutionize it.

Films are now easily accessible by audiences with the emergence of the streaming services like Netflix and Amazon Prime. Hence, this has resulted in producing and distributing films in a new way, along with having a radical expansion of the film market.

Finance: Previously, investors financed the films who later controlled the film. The scene now has changed with Web3, where it is possible to finance films through crowdfunding and cryptocurrency. This new financing model allows people worldwide to get a chance to invest in films, giving them a direct say in what is made.

Film festivals: The landscape of film festivals also looks for a huge change. Many film festivals have changed their screening mode in the past few years. Where previously film festivals were accessible to only those people who could afford to travel to them, nowadays, they can be screened online and viewed by a much wider audience.

New genres: We are witnessing a recent influx of genres in the film industry with Web3. We are no longer limited to the traditional forms of cinema anymore. Unique interactive experiences and narratives have been explored recently that were not possible in the past. Web-based technologies, like virtual and augmented reality, are used in making experimental films, giving audiences a more engaging and unique experience.

How is crowdfunding changing the equation of the film and Web3 sector?

The issue of creative gatekeepers has plagued the creative industry for a long time. That the ultimate source of funding for your work is total creative control. The film business has seen a wide range of issues as a result of that amount of influence. Ranging from the abuse of authority to one-sided cognitive processes on diversity.

However, the studios have been the issue in many ways. Although, one would wonder why studios in positions of authority would view the decentralization of some business operations as a practical remedy for the problems the industry is currently experiencing. Lack of comprehension of audiences has resulted in a surplus of revenue for everything that doesn’t include a superhero. Through Web3 infrastructure, NFTs can offer the tools to modify that and perhaps promote better communication between audiences and studios.

Crowdfunding is a concept that has been around for a while now, but in the Web3 space, it is a bit different to operate because of blockchain technology. The famous film crowdfunding site Kickstarter also intends to launch a new Web3-enabled platform to crowdfund creative projects like films and series.

By adopting NFTs, there has been a significant development for crowdfunding in the creator economy. NFTs are already providing a fair source of income for filmmakers, artists, musicians, and other creatives; they also have immense potential to fund the future work of those people. It is also compelling for filmmakers who often require significant advance funding to get going with their projects.

Many new fundraising innovations, like decentralized crowdfunding, are introduced by the Web3 space. The usage of decentralized autonomous organizations (DAOs) for humanitarian and philanthropic reasons is rising, representing the most exciting potential. DAOs frequently raise money by selling tokens as investment instruments and governance tools. As a result, those considering donating a charitable DAO would be able to vote on important issues like how to allocate the funds or which causes should be given priority. Charitable DAOs would encourage active and continuing participation by contributors, in contrast to the “give and wait” paradigm that prioritizes single-issue fundraising; this would undoubtedly be advantageous to support constructive social change and a thriving creative economy, including the film industry.

As their potential emerges, there must be a thriving ecosystem of decentralized applications and platforms to support benevolent DAOs and other types of decentralized crowdfunding. It’s critical to make sure the groundwork is in place to prove the legitimacy and viability of blockchain-based solutions as many nations begin to take moves toward regulating DAOs.